Our friend David McKnight died almost three years ago, but he is not forgotten. A year ago I concluded a three-part series on David and his journey from being voted “Most Likely to Succeed” in high school to living on the streets and being a street musician for many years in Durham.  It’s a story about friendship, challenges, gifts, and ultimately about David – with the help of many friends – overcoming many of those challenges.  (You can read the story here:  part 1, part 2, and part 3).

David endeared himself to many people with his amazing musical ability, quick and gentle sense of humor, and his great knowledge of North Carolina and politics, often displayed in his email columns.  Shortly after his death in January of 2017, The Durham Herald-Sun eulogized him beautifully in an editorial: “McKnight’s artistry with the violin and the guitar and the quiet warmth of his personality won the hearts of many in Durham, even if they knew him only as a street musician along Ninth Street or at the edge of the Durham Farmers’ Market on Saturday mornings.”

In August of that year, family and friends raised funds and dedicated a bench to David at the Durham Farmer’s Market.  And just a few months ago, friends and family gathered to unveil a memorial on 9th street, where David sometimes lived, and in front of The Regulator Bookshop, where he often played. 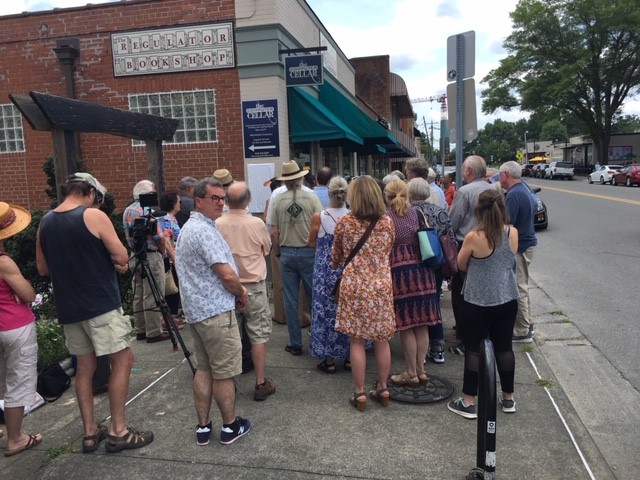 The crowd waiting for the unveiling of the plaque in June, 2019. 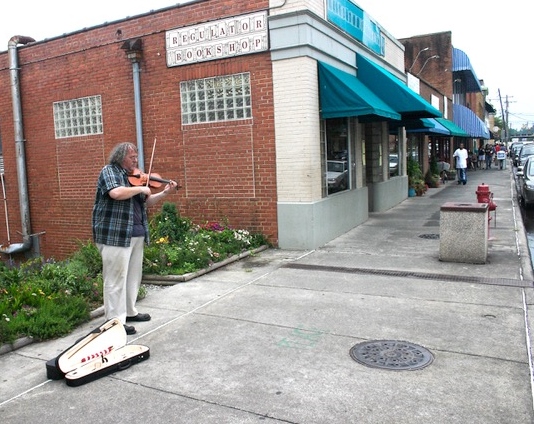 The two leading people in getting the plaque placed were Carol Anderson, owner of Vaguely-Reminiscent on 9th street, and Pete McKnight, David’s brother.  Pete was the creative force on the plaque and having it manufactured.  Carol led the 9th Street Merchants Association to support the memorial.

Carol knew David for many years, and would frequently see and chat with him on 9th Street.   They also saw each other regularly at the Farmers Market on Saturday mornings, where  “David always managed to weave some tidbit about 9th Street into whatever song he was singing at the moment. When I started bringing my granddaughter with me he would immediately break into a children’s song to entertain her.”

At the dedication of the plaque, Carol said, “David was always upbeat and always had a kind word for everyone. I miss him and know all the regulars on 9th street miss him too.”  Those words echo what so many of David’s Durham friends said to me.

So David will live on in the thoughts who those who come to know him through the plaque and in the memories of his family and friends.  But there is more to this “living on” than in memories of the past.  As I’ve come to a time in my life when I’ve lost numerous friends and family, people dear to me, I’ve thought often about the question of how they live on.  I’m drawn to the answer of Frederick Buechner, who so perfectly expresses it in The Sacred Journey.  (I’ve added italics in places.)

“… although death can put an end to them right enough, it can never put an end to our relationship with them. Wherever or however else they may have come to life since, it is beyond a doubt that they live still in us. Memory is more than a looking back to a time that is no longer; it is a looking out into another kind of time altogether where everything that ever was continues not just to be, but to grow and change with the life that is in it still.

I’m going to listen for what David has to say to me. I invite you to do the same for David or others who live on in your life.

Photo credit top photo: Photo of David on plaque by Robert Duvall Smith
Photo of plaque on the building by Bill Pope

Thank you for this beautiful post. Those past loves are still alive..I hear them whisper in my ear and feel them just a moment away. Whether the last time we spoke was long ago, or more recently, those times are still vitally important, as they are a part of my life and journey. Their words touched me, their love filled me, that kind of love can’t die.

Beautiful. My sister, brother, and parents have left this world, but they are always in my life.

Thank you, Norris. Thank you for letting me get to know David.
Thank you also for reminding us that we are all bound in swirling, infinite ether, never gone … simply evolved … transcended.

Might we be mindful to “see” beyond and within the flow of divine energy.

This is beautiful Norris. The people we have known, loved and lost are surely all part of who we are today and will be with us always. Thank you for this article.

David’s personality lives on in parts of my children’s lives.

Adam was first ‘introduced’ to David on 9th Street as a two year old waiting for hand made milkshakes sitting on the trash can outside the old pharmacy while I went inside as David played on his violin.

It was a magical time on 9th Street in the early 90’s.

Years later, each of our daughters (Claire, Megan and then Erin) got to know David in a similar manner. Each learning that whoever you are, you have an individual talent to express to others.

David would see us coming down the street and start playing one of their favorite ‘kids songs’ much to their delight. I’m not sure how he remembered which song went with each kid as they grew up, but it was something special about David in his mind that triggered what to play for each of them.

My favorite was Ashokan farewell. It’s still touches my heart when I recall the afternoon he gave me “Windy and Warm” which had been just released, as a gift. It was a rare moment with the glow of pride he had on his face as it passed from his hands to mine. Cheryl and I now own several copies of this CD and it’s a favorite of ours in the evening, particularly during the fall months sharing a glass (or two) of wine reminiscing.

It was over three years ago when we found out that David was in Pruitt and got a call to pick him up to take him to his last birthday celebration at Elmo’s with Bill Pope, the LeSueurs and a number of his closest friends and fellow musicians.

I’ll let someone else tell the story about those moments and the special connection he had with them and what transpired that evening with staff.

In the meantime, live life out loud and believe in whoever you are, You have talents to share. Don’t hide them! Be with your friends as they might be the last. Those moments are treasurers that MAKE a lifetime (and beyond).

Thanks Norris for sharing. I remember David from Garinger but we were not close friends. I wish we had been. I never knew he was a street musician in Durham until I read it in your post. Again, I wish I had. Merry Christmas !!

Thank you for this. David lived in our neighborhood, I wish I had seen him later in life. What a special, unique individual.

Thank you for another thought-provoking post. The reading is also uplifting in many regards, though one could also sense an underlying sense of loss or sadness perhaps motivating the writing. However, that may just be my own overlay suggesting I get off the couch a little more often.

I regularly hear my grandmother or recall her in some way that is encouraging even though she’s been gone 30 years. Indeed, as I’ve aged I have come to a deeper and richer understanding of the many lessons she shared with me. In my better understanding of her, I have learned to appreciate the wisdom of those around me so much more.

Thank you for the wisdom you share in your posts and for all the many years of wisdom shared otherwise. As always, best wishes and love to you and yours.

Great thoughts! I shared with a friend who lost her husband recently.
Hope you are doing well.

Thank you. I hope you are doing well.

It is great to keep the memory of David alive. We all have Davids in our lives, who have left us but are still with us in memory. A friend of mine was buried on Monday. We were not real close, but we had a good time kidding each other about our golf games. I am going to miss that and I will be thinking about him for a long time. The same way you will be thinking about David for a long time.

So well said So well done no one could ask for better. Karen says hi as i do also, I was one of the slow kids and you and David were in the smart group but i always thought of you both as friends God bless you and yours. lew

Norris, I love your exploration of the continuation of the relationship with our loved ones. My experience is that the relationship does continue, but now it’s in a non-physical form that can deepen and illuminate us in ways that couldn’t/didn’t happen in physical form. What a wonder life is. I’m wondering if you’ve spent time investigating Carl Jung.

Norris,
As always, a moving post. Thank you for eloquently reminding us that “living on” is an active experience, not a passive one. It’s about what is present and still unfolding in our lives, including thoughts and responses and conversations that are as “real” now as they once were. Thank you for the medicine of mind and soul.

15
0
Would love your thoughts, please comment.x