By Dr. Norris Frederick
Second in a series

My thanks to you for the many thoughtful responses, both on my website and on Facebook, about my first post on death.  A couple of you wrote that you don’t fear death, thus challenging my idea of “that feeling of existential terror that we all feel at some points of our lives.”  Everyone, however, offered some explanation of the role of death in our lives.

Urban living and modern science and medicine have changed our experience of death.   In earlier times, death occurred in the home and often rather quickly.  People grew old, perhaps got pneumonia (“the old person’s friend”) and died in the home.  Even young children observed the death of their elders.  Today for many of us the death of those we know has become a bit more “out of sight, out of mind.”

Seventeen years ago I was a faculty leader on a Queens University of Charlotte student study tour of Italy.  We started the tour on the beautiful Amalfi coast, where our hotel overlooked the sparking Tyrrhenian Sea.  We took a boat to Capri, rode a taxi to the top of the island, where we sat under a restaurant umbrella enjoying the world’s best cappuccino.  It was morning, we and the world were young, full of possibilities, relaxed and enjoying life in the best Epicurean fashion.

The next day we rode the bus to Rome, which was beautiful in its own way, but also busy, noisy and crowded.  We had to be alert when crossing the street to avoid being hit by cars.  The students adapted, though, and quickly found the best clubs and bars, staying out just as late as possible.

One morning our itinerary showed we were to visit Santa Maria della Concezione dei Cappuccini (Our Lady of the Conception of the Capuchins).  The students assumed it was yet another church where we would see and “appreciate” sculpture.  Neither they nor we faculty were fully prepared for the key feature of the church, The Capuchin Crypt.  We faculty walked to the entrance of the Crypt, paid the entrance fees for us all, and stood aside to let the students go in first.  Their initial responses of “Oh my god!” appeared the most reverent of any church we had entered — except their “Oh my god!” exclamations were closer to disgust than to awe.  Before us in the first of six chapels/crypts were displays of bones arranged to form a theme.    We were overwhelmed both by the gargantuan number of bones as well as by the arrangements where bones had been clothed to resembled a body.

In all, there are the bones of about 4,000 skeletons.  The students who had been out late at the bar may have been thinking about how good it would be to take a nap, but this tableau no doubt left them wide awake. 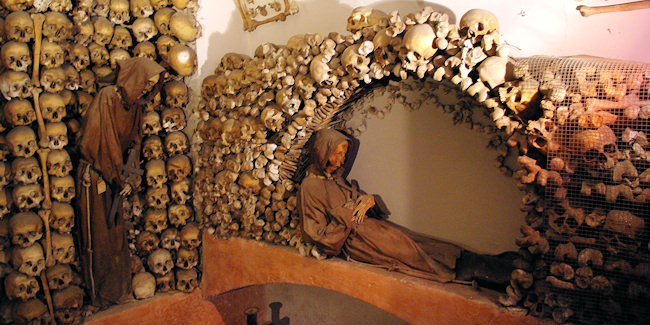 For the professors who hold the knowledge in their brains in such high esteem, there was also this in The Crypt of the Skulls. 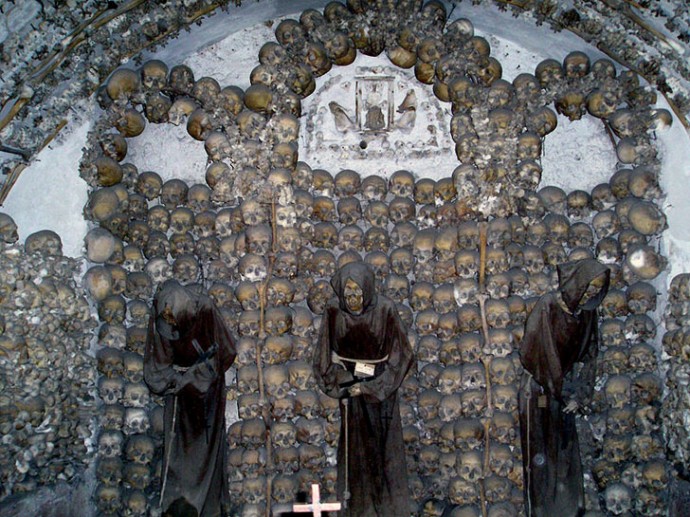 We no longer felt young and relaxed, with the world at our fingertips.

When the Capuchins, an order of the Franciscans, moved to this location in 1631, the Vatican ordered that they take with them the remains of their deceased brothers The Capuchins went one step further than “when life gives you lemons, make lemonade.” They apparently decided “when the Pope gives you bones, make art.”

Just as we whispered to ourselves little jokes and smiles as we went through the Crypt twenty years ago, I find myself even now trying to make light of the all-too-real bones.  The whole crypt does seem macabre.  Why would anyone construct such a crypt?  In fact, why would anyone visit there?

The answer, and the very most chilling thing we saw, was a small plaque among the bones, which read

“What you are now, we once were;
What we are now, you shall be.”

Oh. My. God.  They were once like us, young, happy, excited.  And we shall one day be as them:  mere bones.

We could not wait to get out of there.  After exiting we dispersed quickly to find a late cappuccino or an early lunch or even better, a beer.  Whew….  We smiled, we even laughed, but for a while we could not shake off the image of our own deaths.

Was it worth the shock?

The Capuchin friars clearly want to remind us of the temporary nature of our life here on earth, in hope that we will be reminded of the eternal life to come after this one.  We need to be oriented toward the world to come, and to rid ourselves of the vanity of putting too much emphasis on this life.  We aren’t all that.

The Epicureans also recognize that life is fleeting, but they offer no hope for a life after this one.  Instead, they urge us to live this life as fully as possible.  As the poet Horace writes,

“While we are talking, jealous time has fled.
So seize the day, and do not trust the morrow!” [1]

The Capuchins and the Epicureans hold radically opposite beliefs about an afterlife.  However, they share the belief that it is important that we face the reality:  we will die.  Facing reality is a good thing.  Our own culture has as much as possible removed death from the home, placing it in sanitized hospitals and funeral homes, lessening its reality.  People in the developed world spend a great deal of time in the virtual reality of the internet.  National politics in the U.S. are often divorced from reality.

So the Capuchins have done a good thing in helping us to face reality.  It’s up to us now as to what we do with that knowledge.  Thinking of all those bones and the reality of death, we could do a lot worse than to follow Horace’s advice:

“Persuade yourself that each new day that dawns will be your last.  Then you will receive each unexpected hour with gratitude.”[2]

Ike, thanks so much for your insights.

Maybe I did not feel the same about death when I sat in a young Philosophy professors class many years ago. Subjects of such gravitas were simply not on our radar, even in a Philosophy of Religion class.

But I could be misremembering as is common of folks my age. I do read in fascination this recent pondering on the question of death, and wonder if it is common for those of younger years to see death as something they do not wish to be reminded of…yet. There is plenty of time later, long after the experience and enveloping of loves, family, learning, and careers have seen their fruition, and one is closer to the end rather than the beginning.

My wife and I were fortunate to have a similar trip last year where we visited Rome and numerous ports along the Amalfi coast on our way to Greece. While we did not see the bones of 4000 skeletons, the footprints and sepulchers of past generations and cultures abounded, and through these we are also reminded of life’s natural progression.

I was one who has never feared death; rather, I would be likely to fear living a life without mental and physical capabilities. Death, to me, is but a rite of passage, I think.

I do wish I had given it more thought when it came to my own parents. There was a part of my that never seriously considered *their* imminent deaths. I am, however, so very pleased that both were able to end their lives at home with family near. I would ask for nothing more than that.

Gary, thanks so much for your insights.

Excellent article and photos! Wow! I love Horace’s advice, hope to keep it front of mind. I’m also so very glad I’m a Christian and have Heaven to look forward to. Keep writing Norris, you’re articles certainly make me think.

Virginia,
Thanks so much for your comments!

Norris,
Thanks so much for this post. So many things to ponder. First, I can’t think of a better justification for an international trip than to face (literally) matters of what it means to live and die (and live and think about dying). The plaque you reference is a kind of identification we don’t experience in our modern world–we are different, yes, but death is the ultimate unifier in ways that ironically seems to take a lifetime to understand. And I love Horace’s advice as this might be the most advice to be told (and retold) in a modern world that endlessly conspiracies to make us forget this truth. Thanks for the deep insight. Cant’ wait for the next post . . .

Zachary,
Thanks so much for your encouraging words and for sharing your fine insights.

Thanks again to Norris for stimulating our thinking and encouraging the sharing of views. Here’s what came to my mind.

Horace lived well before the Capuchins created their symbolic crypt in the 17th century. Had he viewed it, his famous quote might have been: “So seize the day, and do not trust the marrow!”

I doubt he would have exclaimed ‘Oh, my God,’ but may have mustered a chuckle or just had shaken his head. Death in those days and well up to the dawn of the Enlightenment in the West was rather commonplace, especially among the common folk. On average, death came much earlier than today, sometimes two or three decades earlier. Death in childbirth was fairly frequent for both the mother and the baby. Consequently, procreation was elevated in practice and significance.

Religion and the strong belief in the myth of an afterlife help to numb the pain and toil of daily life. Today the hold of religion has significantly weakened and the advance in science and medicine has accentuated the significance of death in western society. Modern capitalism and its important wing of marketing and advertising have elevated the worship of youth and beauty as the raison d’etre of being young regardless of one’s age. Cosmetic surgery comes to mind.

Consequently, the attitude of modern culture toward dying is one of anxiety at best and fear at worst. Carpe Diem is a good credo for our times, but because of the fetish of youth and celebrity it is rarely followed unless through Botox and facelift ads. That should make us truly anxious.

Thanks so much for your insights and for the pun “do not trust the marrow!”!

Thank you for sharing this exceptional reminder of how precious time is and the value in making the most of each moment. The photos and words from Horace guide our focus- to see the beauty in the gifts we have, the opportunities nearby, and the bonds in friendships and family, that provide meaning and joy during our brief visits here.

Thank you so much for your thoughts and for your connection of Horace to the gifts we have in “the bonds in friendships and family, that provide meaning and joy during our brief visits here.”

Healthy-Mindedness and the Sick Soul - Philosophy for Living Today - the website of Dr. Norris Frederick

[…] my most recent post on death, “Out of Sight, or Front and Center?” I wrote of our study tour visiting the Capuchin Crypt in Rome, where the bones of thousands of […]

13
0
Would love your thoughts, please comment.x