“No one would choose to live without friends,
even if he had all the other good things.”
–  Aristotle[1] 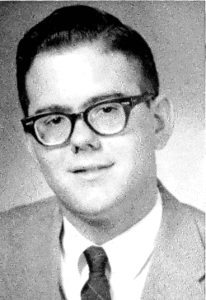 Aristotle is right: who would want to live a life without friends?  We especially realize that when a friend moves away and most vividly when a friend dies.  In January of 2017, my friend David McKnight passed away.  A man who already had endured many steep challenges in his life, he had been diagnosed in November with a massive and inoperable brain tumor.  When the news came about the brain tumor, it seemed to foretell the sad end of a tragic life.  Was it?  Let me tell the story of David and of some of his friendships, and you be the judge.

David wrote the sports column in our Garinger High School paper, was voted in 1966 the senior guy “Most Likely to Succeed,” and was a finalist for the highly esteemed Morehead Scholarship to UNC – Chapel Hill.  Perhaps my earliest memory of him is from Miss Mary Balle’s English class, where we read Chaucer, Shakespeare and all the greatest hits of Brit Lit.  David was always full of energy, unable to repress his bad puns which we all secretly loved.  Once he somehow turned a class discussion to a question of responsibility about actions just so he could say, “It’s neither my Faulk-ner yours that It happened.”  All of us, including Miss Balle, groaned, and then we all laughed.  The memory makes me smile.

He and I played tennis matches near his house, at Midwood Park. The tennis was fun, but David’s running commentary before, during, and after the match turned the game into struggles both hilarious and grand beyond words:  Beowulf vs. Grindel, Rod Laver vs. Ken Rosewall, madness vs. King Lear.

The Guy Most Likely to Succeed was accepted at prestigious Duke University.  There he could continue his virtuoso violin, his study of multiple languages, history, journalism and whatever else struck his fancy.  It looked like a cloudless blue sky. 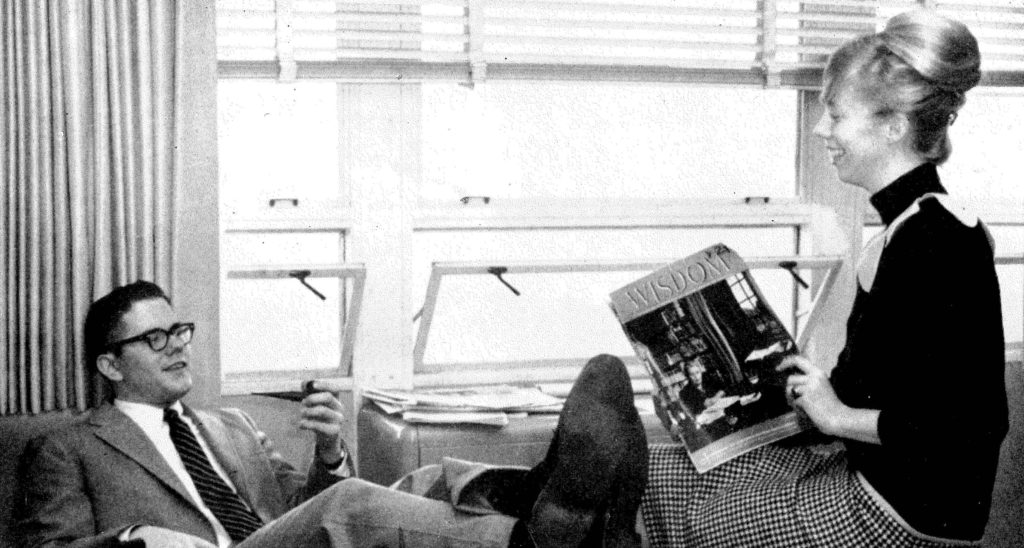 Then there were surprises I never saw coming.  David became the guy wearing the Duke Blue Devil costume at basketball games. Still full of hilarious and grand stories.  Like the exam he refused to take because of a difference of opinion with the professor, thus an F.  More F’s.  Ultimately an unfinished college career in which every course earned either an A or an F, according to David.  He did not want a high-brow college education, he wanted a life of the rough and tumble of journalism.

After leaving Duke, he told me one day in 1968 that he had decided to fly to Czechoslovakia to report on the Prague Spring  liberalizations in that Communist country.  Given the threat of an invasion by the Soviet Union, the decision seemed both sudden and perilous.  The next day I put him on a plane to Prague. He carried his manual typewriter in its case, and a gym bag containing a change of underwear and one clean shirt – that was it.  It was crazy.  And, I thought, heroic.

He published some fine stories on that trip, came back and got jobs with newspapers in Durham, Greensboro, and then in Fayetteville, where another of our close high-school friends lived.  When my wife and I visited there, David and I played tennis in the hot summer morning sun.  We all drank Tequila Sunrises afterwards.  It was grand.  That night we all rode around the town, David with his beautiful and accomplished fiancée.  We passed by a Fayetteville structure resembling the Eiffel Tower, and David cracked us up with, “When I saw the tower, I-fallaciously thought we were in Paris.” We were young, life was good.

Philosophy begins with questions and problems that arise from our experience. As I look back on these early years of my friendship with David, as I wonder about what friendship really is and whether I really was David’s friend, my questions transport me from memory, narrative and emotion to more analytical thoughts about our relationship.  Aristotle’s observations and thoughts about friendship, written over 2,300 years ago, are still helpful today.

“Now those who love each other for their utility do not love each other for themselves but in virtue of some good which they get from each other.”[4] The idea of a “friendship” being based on usefulness to one another might seem base, but think about a friend at work or a neighbor:  you wish well to and feel affection for one another, but the cooperation and alliances form the basis of the relationship.  These relationships may go no further than utility and tend not to last very long once the usefulness goes away, as we change workplaces or neighbors.  What we love in such relationships is what is good for ourselves.  We love the usefulness of the friend; we do not love the person for who he is.

The same is true for friendships based on pleasure.  We enjoy our witty friend because of the pleasure she gives us, not for the person she is.  Once we no longer enjoy our friend’s wit, these friendships tend to fade.

Was my early friendship with David at least partly based on usefulness and pleasure?  Well, yes, as I look back on it and ask myself this question for the first time.  David came from a wealthier neighborhood than I, and he had gone to the “in” junior high, whereas I had gone to the “out” junior high, with a relatively higher number of poorer and intellectually weaker students.  By becoming his friend, I moved up in social status and became accepted by David’s friends.

And certainly, his quick wit and good spirits gave me pleasure.

I was  aware of some good character traits (aka “virtues”) he possessed, such as his intellectual persistence, curiosity, and sociability.  It is sharing and valuing virtues that for Aristotle form the basis of a complete friendship.  But David had some bad character traits (aka “vices”) that made a complete friendship challenging, as at times he seemed to be a social climber, his attention and time quickly moving to someone else more important.

That’s ironic: I just realized that I criticized David for what I used him to do for myself, to climb up socially. 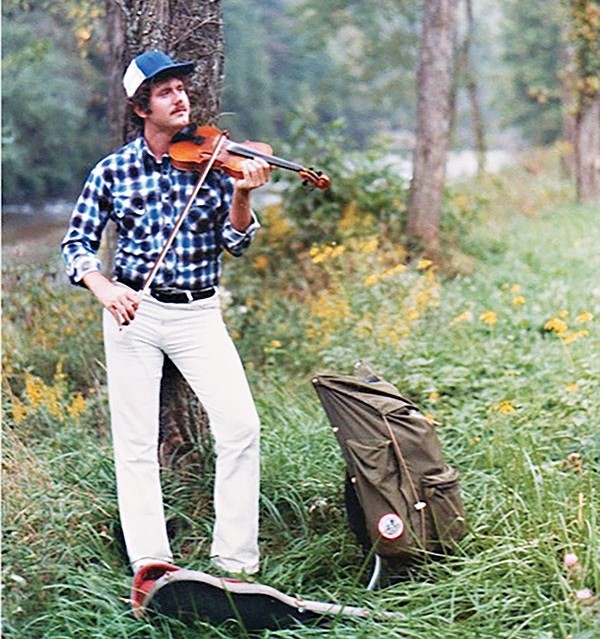 In 1977 David made another grand decision, reminiscent of his ’68 trip to Czechoslovakia:  he decided to leave his job as a journalist to run for the U.S. Senate.  He walked the entire distance of the state — 1,654 miles — from Manteo to Murphy, carrying a change of clothes and his fiddle.  He got lots of good press coverage, promising voters that he would not “fiddle around” if they sent him to Washington. But that campaign was also when I first began to see the cracks.  He ran up large phone bills, came in 5th of 8 candidates in the Democratic primary, and destroyed his relationship with his fiancée.  In my eyes, he was never quite the same after that campaign.

He lived here and there.  He started spending more and more time playing with various bands.  For a while he lived in a huge apartment in an old building in the French Quarter of New Orleans and played in a band on Bourbon Street.

In the 1980’s David inherited a sizeable amount of money when his father died, offering the chance for financial stability.  But again he had a grand vision that he put into action.  He traveled a good bit of the Eastern U.S., visiting symphony orchestras where during a performance he would donate to that orchestra an expensive violin that he had purchased from John Sipe’s Presidential Series.   Sipes named those violins after various presidents.  David bought a few and then donated them to musicians or the orchestras in the cities where those presidents were born. For example, he went to Missouri to deliver the Harry Truman violin.[7] Often David performed, playing his violin with those orchestras.

Once he showed up at our house in Charlotte, his usual energetic story-telling self.  “I am travelling around visiting all the best minor league baseball parks,” he said. “Three nights ago I was in Toledo, and then the night after that in Nashville, and last night the Asheville Tourists.”  And then he would go into rich detail on the glories of each park and its history and the history of the city.

A Grand Life, Except…

It sounded a grand life, except for a couple of things.  He almost always was alone on these long road trips.   And it seemed more and more often the story would take a strange turn, “So right as I was coming into Charlotte I saw my odometer hit 400 miles, and that make me think that in another year it will be 400 years since the founding of the Old North State, and so I have an idea that could connect the Republicans and Democrats in that…” and suddenly I could no longer follow what he was saying.

At some point, maybe in the early 1990’s, David no longer came back to Charlotte and I lost touch with him.  (Or did I just not try hard enough to keep up with him?) I eventually heard from friends he was living homeless in the Triangle, back and forth between Raleigh and Chapel Hill and Durham.  He played his violin as beautifully as ever, but on the streets.  He never asked for money, but gratefully accepted it if offered by folks who were listening.  He rarely bathed and smelled bad, and of course his clothes were dirty.  That’s what it’s like if you’re homeless and living on the street.  Going to a shelter was not something David was willing to do.

Next time:  The rest of the story

[7] Thanks to David’s niece, Meg Whalen, for this information, via email.

28 Replies to “What Else Matters? Friendship”