My family preferred to deal with challenges and craziness with humor, thus the plaque my sister Virginia gave to me on a recent birthday, “Just remember: as far as everyone knows, we are a nice, normal family.”  I laugh every time I see this sign, as does everyone else.  We can all see, in retrospect, the craziness in our families, and if it was not too harmful, we can laugh about it.

My parents, siblings and I lived in a house originally occupied by my mother’s parents.  The small house, with three rooms on each side of a central hall that ran the length of the house, was typical of modest homes in Charlotte built around 1920.  By the time I was a young teenager, the house was definitely aging.  Things needed fixin’.  But we had neither money nor the know-how.

One evening we heard loud noises coming from the attic, much too loud for a squirrel.  As we read and watched television in the living room, we were concerned. What was that?  Since we couldn’t figure it out, my brother Charlie and I and our father repaired to the kitchen to get a bowl of ice-milk before Gunsmoke began.  We later drifted to sleep, accompanied by the rumbling in the attic.

The next day I was pitching a rubber ball against the front steps when I saw movement on the lower portion of the roof.  I saw a large, fat possum ambling toward the side of the roof.  It then disappeared. I walked closer to the roof, where I could see a possum-sized hole in the lower left corner of the house, just above the roof. Ah-ha!  Mystery solved!  I was excited to tell everyone what was causing the noises in the attic. 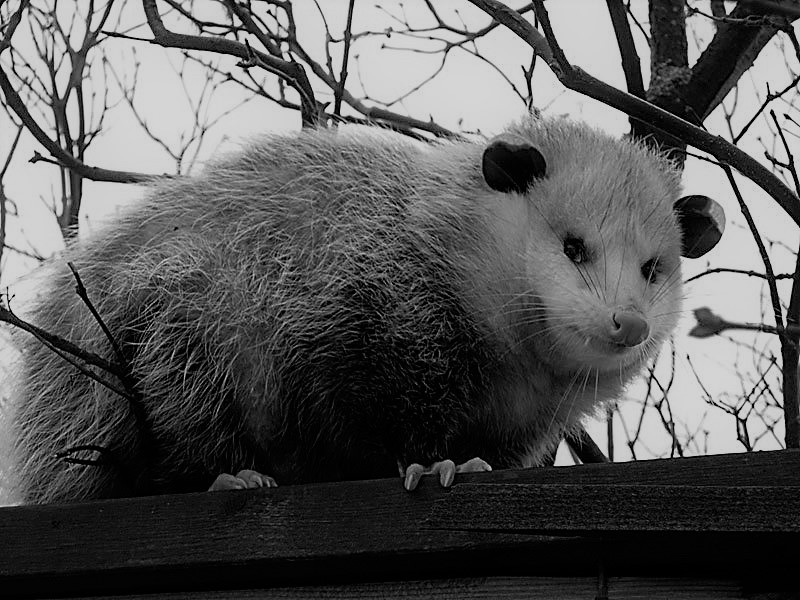 And what did we do with this knowledge? Well, mostly it enabled us to say with a rueful smile when we heard noises in the attic, “There’s that possum again.”  It seems that the six of us living there, including our father, never thought of canvassing our neighbors to see if anyone had a ladder that would reach up to the roof.  Perhaps the thought that we’d additionally need a board and some nails to make the repair made it out of the question.  Our dad would hear the noise, glance up and then go on reading the paper.

Learning to Solve and Think About Problems

As I became a teenager and later when I had my own family, I began to see ways to live other than ignoring the possum or contemplating the possum.  I learned how to fix some things:  a flat tire, an electric dryer, an attic fan, loose bricks in a chimney, etc.  As long as the result did not require too much precision, I did okay and took great pleasure in solving problems.  In fact, I became a bit proud. There are ways to keep the possum out of the attic!

My actions in fixin’ things connected well with ideas.  I came to realize there is a conceptual aspect to fixing things, including gaining knowledge about the underlying structure of a thing, and in all cases defining what the problem actually is rather than just what it first appears to be. In philosophy grad school, I was delighted to learn that the philosophers known as the American pragmatists – Charles Peirce, William James, and John Dewey – wrote that philosophy itself is an attempt to solve problems.  Belief is a satisfied state that is interrupted when doubts begin to arise about the workability of those beliefs.  We believe the roof is in good shape, but then water stains appear on the ceiling.  We believe that our race is superior to others, but then we encounter folks of other races who demonstrate the falseness of this belief.  Doubts arise.  The doubts lead to an attempt to clarify and then to address the problem.  Peirce even wrote an article entitled, “The Fixation of Belief,” about four methods to move from the problematic feeling of doubt to the settled state of belief:  tenacity (stubbornly hanging onto whatever beliefs we have); authority (of others, societal leaders who tell us what to believe); pure reason (looking for a consistent set of beliefs); and the scientific method (which goes beyond just consistency to find ways to test various hypotheses about the world).

So now I could not only fix some things, I could think and talk about methods to solving problems!  I was feeling pretty good.

One Saturday after I’d left grad school, in the year I first began teaching – in a high school, while I finished my Ph.D. dissertation in philosophy – I walked out into our carport and saw that my left rear tire was flat.  Ah, a nice easy problem to fix on a pretty fall morning, with plenty of time.  I opened the trunk to pull out the 4-way lug wrench, popped off the hubcap, fitted the wrench to the tire to loosen the lug nuts, and turned it to the left.  Hunh!  This nut was really tight.  But I was young and relatively strong, so no problem.  I bent my knees, grabbed the wrench tightly, and turned left with all my strength.  What!  Instead of the lug nut coming off, the wheel stud broke off from the wheel!  How the heck did that happen? It must be some freak incident, perhaps due to a weakness in the bolt.  I was agitated, and at the same time a bit pleased with my strength. 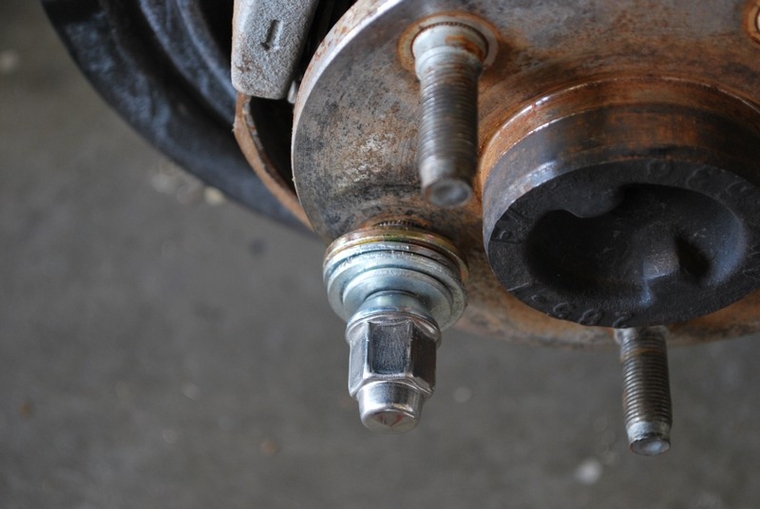 Okay, I thought, I’m sure after I remove the lug nuts on the other wheel studs, I’ll still be able to drive the car until I can get it repaired.  I moved the wrench to another nut, braced myself, and turned strongly to the left, and broke off another stud.  What the hell??!!  Now I was furious.  This stupid car!  I tried another nut, turned with all my might, and  – you guessed it – broke off that wheel stud too.

Having spent all my adrenaline, I sat down on the steps and cooled off.  I thought finally to look at the car’s manual in the glove compartment, turning to the section on changing a tire. Crap!  As I read I remembered:  this Dodge Dart is a Chrysler, and Chrysler have left-handed threads on the left side of the car, so to remove the nuts, you turn to the RIGHT, not to the LEFT as on every other car I knew!  Omigosh, how humiliating.  I went back to the wheel and looked at the lug studs and saw an “L” clearly stamped at the end of each stud, indicating a left-handed thread.  I felt all the energy drain from my body.  I finally recovered enough to remove the other lug nuts and drove slowly to the filling station where I sheepishly explained my problem and let the professionals fix the problems I had created.

What caused this minor disaster?  Certainly a lack of knowledge of the underlying structure of the bolts.  However, the real cause was my pride and then my anger.  I threw myself into the torrent of pride and anger, and then found myself swept downstream, ultimately wrecked.

A year or so after My Humiliation I read a book that greatly influenced me, Zen and the Art of Motorcycle Maintenance, by Robert Pirsig.  The book is both about the most lofty metaphysics and also about…well…fixin’ things.  In the 1975 Bantam Books paperback I’ve held together with tape, the frontispiece quotes two statements from the book: “The real cycle you’re working on is a cycle called ‘yourself’….Working on a motorcycle, working well, caring, is to become part of a process, to achieve an inner peace of mind.”

That’s it.  My ego demanded some magic by which a piece of metal would submit to my strength, anger became my dominant emotion when it did not, and much to my surprise that did not end well.

Reading Pirsig’s Zen led me to be curious about Buddhism, and I learned that one of the Buddha’s Four Noble Truths is that “clinging desire” or “craving” is the cause of much suffering.  “Clinging desire” is the result of my belief that there is nothing more important than my individual self, and if I can just cling a little tighter to what I want then I will be satisfied.  If I just cling to my righteous anger then the wheel lugs must come off in the direction I turn them, cling to my desires that my friends and loved ones will change to be exactly as I want them to be, cling to my demands that my cravings be ceaselessly met, then I will be happy.  In fact, since these desires are based on a false view of reality, this attitude results in unmet desires and living in a continuing state of dissatisfaction.

There are some possums we probably should just leave alone.  And there are lots of problems we should resolve the best way possible.  Either way, rather than demanding of reality that our desires be met, Buddha advises that we get rid of those clinging desires and cravings.  If we do, he says, that sense of things being unsatisfactory and unworkable will go away, or at least lessen.  We can train ourselves — through meditation, mindfulness of the present, and practicing compassion — to lessen our desires and paradoxically increase our sense that this life is satisfactory.

I loved this entire post Norris, and the possum event certainly described our family and made me laugh. The story about the lug nuts was great also. And as you say in your closing paragraph, yes, our lives really are quite satisfactory overall when we stop and consider it all. I’ll remember this post. Thank you!

Thanks so much, Virginia! Yes, there are enough family stories to keep us all going for a long time!

This was a fun piece to read, Dr. Frederick. I liked the gem at the end. I have to concur with you: “There are some possums we probably should just leave alone.”

Thank you. I am reminded of the question, Both personally and collectively, what are we clinging to — holding on to for dear life that is killing us? Can’t recall the source of the question.

Thank you, Gary. I don’t know I’d heard the question you cite, but it’s a really good one: “Both personally and collectively, what are we clinging to — holding on to for dear life that is killing us?”

Thank you, Hope. Glad you liked that last thought about possums. There is something about them that just makes me laugh. But they can make a scary sound and face if you encounter one up close when it feels cornered!

Once again, a great reflection as I turn the lug nuts of my life. Kudos

Thank you, Mark. And I love your metaphor, “as I turn the lug nuts of my life”!

I am deliriously happy the Frederick family let that possum family live at clinging free life.

Through possums and lug nuts, Pierce, James and Dewey, there is wisdom. Thank you for helping us find ourselves in the humor of our foibles. I’m a work in progress when it comes to your last line, Dr. Frederick!

Another “incredible” musing from my old professor (old as in past). With us, it was bats. I can identify. And it’s funny that after reading Pirsig’s book, I remember the passage so well about his struggles with that one screw…

Ah, bats in the old belfry! I’d like to hear that story sometime. Your memory of Pirsig’s book is….well, incredible!

12
0
Would love your thoughts, please comment.x