In the video clip [1], George Carlin asks with his inimitable humor, “That’s the whole meaning of life, isn’t it: trying to find a place to put your stuff?”  In questioning “stuff” he’s making a very similar point to the question Epicurus asked in my most recent post about Marie Kondo’s book The Life-Changing Magic of Tidying Up, “why did you buy all this crap in the first place?”

I wrote last time about Kondo’s methods, my own desk piled with papers and stuff, why Epicurus thinks Kondo does not go far enough, and the ideal of simplicity.  Some of you wrote me that Kondo’s method and the feeling of control brought by keeping only what brings you joy really works.  Some wrote wittily that your own working conditions are quite different from Kondo’s ideal.  One friend wrote, “My desk is about like yours, and I like it that way-it is comforting and makes me feel attached to life; however, I do declutter now and then.”  Another wrote, “I have a dual approach to my cluttering/hoarding/neurotic stacks, piles, and general messes:  avoidance and denial, which has long served me well; and motion—every time I move a pile it gets smaller, motion = attrition.”  A third wrote, “I am inclined to delete this challenging email, so I don’t have to think about the stacks of stuff in my office until they start toppling over.”

Several of you shared in different ways this later-life sentiment: “Being executor of my brother’s estate and having to deal with his entire lifetime of voluminous and useless clutter has at least made me think: I DO NOT want to leave tons of useless stuff for my kids to have to deal with when I am gone.”  And another friend said, “When I travel abroad, and especially to places like rural India and rural Jamaica, my sense of how much ‘stuff’ is really necessary gets – well – turned upside down. Basic needs must be met, of course, but we Americans live in what is arguably the most materialistic culture on the planet and we are products of our culture, whether we like it or not.”

These last two comments bring us back to “useless stuff.”  Epicurus asks us a question that goes far beyond Kondo’s book:

“Why do you buy all this crap in the first place?  Why have you bought an enormous home and then tried to fill every part of it with expensive items?  Aren’t you constantly worried about paying the mortgage and buying even more expensive stuff that you see on the strange screen where you stare at this enormous marketplace? 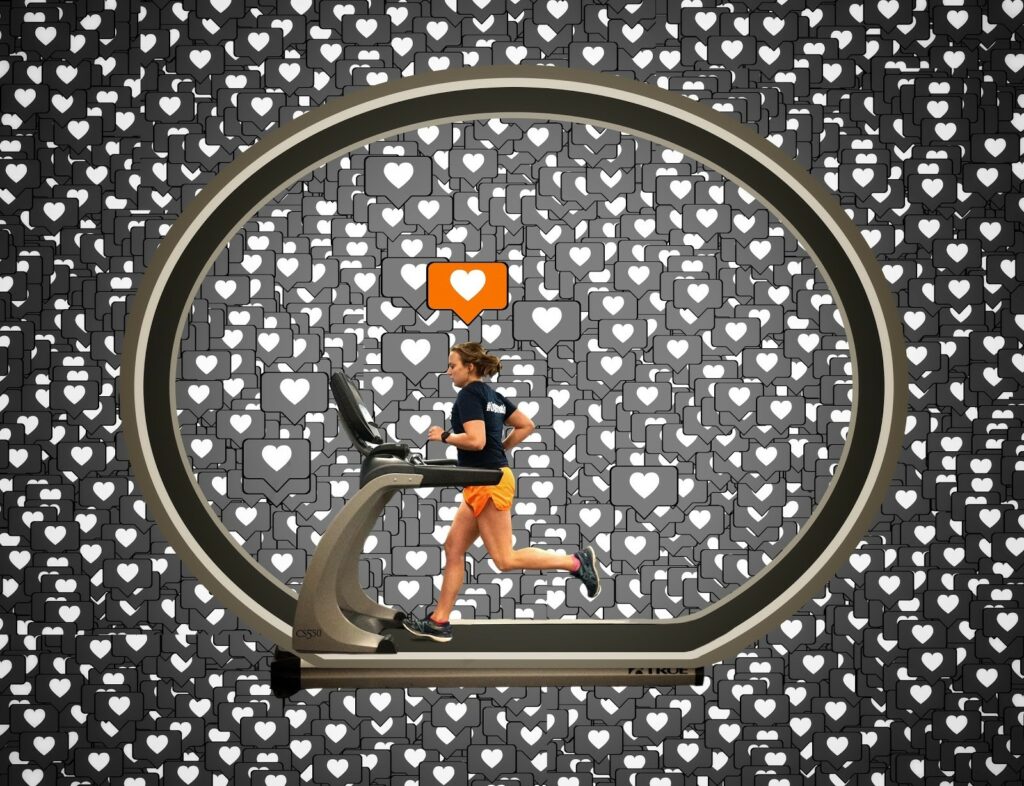 (photo/graphic above  by Ida Osterman,
Queens University of Charlotte, used by permission)

One pervasive force in accumulating stuff is what psychologists call the “hedonic treadmill”[2] (“hedone” is Greek for “pleasure”) :  the belief that gaining that new car or new shirt or a 5% raise that I see in front of me on the treadmill will finally bring me happiness.  However, as Jonathan Haidt writes, “Nerve cells respond vigorously to new stimuli, but gradually they ‘habituate,’ firing less to stimuli that they have become used to.”[3] Instead, over time and due to hedonic adaptation, that object attained loses its initial excitement and hope, and is replaced in our view by another object or later a bigger raise which we think will bring us happiness.  And our striving and stress on the treadmill goes on and on and on.

So perhaps we should do as Epicurus argues and focus only on the simple pleasures which have almost no negative consequences:  eating simple food and drinking inexpensive wine; reading; philosophical conversation; and friendship. In fact, however, the ideal relationship between material goods and the good life is complicated.  After all, even with all his emphasis on focusing in simple pleasures, the life of Epicurus and his followers required money to acquire the school he opened in the garden (“The Garden”) of his house.[4]

American History and The Ideal of Simplicity

A study of American history also demonstrates a frequent avowed love of simplicity but also the difficulties in living that life, as David Shi masterfully illustrated in his book The Simple Life: Plain Living and High Thinking in American Culture .[5]  The proper balance between achieving the necessities of life and following the higher calling of man, hoped the Puritan Governor John Winthrop, could make America a “shining city on a hill.” To help people achieve the good life, the Puritans enacted laws that prohibited the wearing of any vain accumulations of stuff:  gold buttons or silk scarves allowed.

So whereas the Epicureans invited followers to join them in choosing and living a simple life, the Puritans decided to cut out that cumbersome individual decision process and force citizens to live such a life.

The founding fathers of this country were strongly attracted to the histories of the late Roman republic which “portrayed the Republic as a serene, pastoral nation of virtuous citizens.” For a number of years, Thomas Jefferson hoped that the United States could be an industrial yet decentralized nation, and thus could maintain agrarian values. Jefferson declared himself an Epicurean, stating in a letter that “to be accustomed to simple and plain living is conducive to health and makes a man ready for the necessary task of life.”[6]

Of course Jefferson didn’t lead a particularly modest life, as knowledge of his slave plantation and a visit to Monticello make clear. But Jefferson stated an ideal that remained strong in America.

The individualistic spiritualism of the Transcendentalists in the mid‑19th century led to fascinating attempts to live out the simple life.  Emerson restates the idea of the Epicureans and Stoics when he writes, how “to spend a day nobly is the problem to be solved.”[7]  But Emerson’s home required domestic servants, which friend Thoreau criticized severely.  Thoreau went to Walden Pond (on land Emerson owned) to learn the necessities of life, and to write. His two‑year stay there relieved him of many illusions. The Indians and the farmers he met in his travels were not the noble children of nature his romanticism had pictured. He once was excited by meeting a Canadian woodsman who told Thoreau that if “it were not for books,” he “would not know what to do [on] rainy days.” Imagine Thoreau’s disappointment when he discovered that the man’s only books were “an almanac and an arithmetic” and that he knew nothing and cared less about spiritual views  or current social issues such as the antislavery movement.[8]

Thoreau decided that wilderness and the primitive life were necessary but not sufficient for the simple life, a view that became increasingly popular around the turn of the century and remains so today in somewhat different form, as we Americans climb into our “recreational vehicles” or take luxury cruises and either way take our computers with us on our return to nature, where often the first thing we do is to check the phone reception to see if it’s adequate for receiving internet.

President Jimmy Carter addressed the growing consumerism of America in his famous “malaise” speech of July 18, 1979, saying, “owning things and consuming things does not satisfy our longing for meaning.  We have learned that piling up material goods cannot fill the emptiness of lives which have no confidence or meaning.”[9]

Epicurus pursues that meaning by focusing on some simple pleasures.  Instead of just carefully going through your stuff and getting rid of it, quit organizing your life around material possessions that ultimately distract you from a life spent on more important things, like friendship, reflection, memories that matter and the joy of being alive.

The Reverend Scott Killgore, once my student, now teaches me as he insightfully puts it all into perspective:

“I would argue that our cultural addiction to material possessions is a spiritual issue. Unless that spiritual struggle is acknowledged and dealt with, then we will find ourselves to be like addicts who struggle to break free, but repeatedly fall back into the clutches of whatever destructive addiction has taken hold of their lives.  Simplifying our lives in terms of material possessions is commendable, desirable, and something that would benefit most anyone. But, it may be more difficult to simplify our understanding of what makes us genuinely happy.

“Simplifying our lives when it comes to material possessions is a good way to start, but it marks the beginning of a journey, not one’s arrival at a desired destination.”

[1] From YouTube, search “George Carlin Stuff.” Thanks to two friends who suggested this video.