Recently I was browsing the internet, looking at philosophy websites.  I came across one with a prime domain name:  philosophy.com.  I wondered what philosophers and topics were covered there.  Plato?  Sartre?  Perhaps a discussion of contemporary ethics?  So I clicked on the url, and was quite surprised to find that philosophy.com is a site for…perhaps you guessed it or knew…a line of products for beautiful skin. 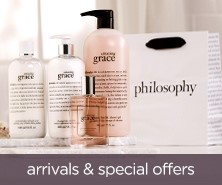 I found myself thinking about philosophy.com for several days, wondering why it stayed on my mind.  And then it hit me that Soren Kierkegaard had given the diagnosis for this symptom long ago:

“Not just in commerce but in the world of ideas too our age is putting on a veritable clearance sale.  Everything can be had so dirt cheap that one begins to wonder whether in the end anyone will want to make a bid.”[1]

Kierkegaard wrote these words to open his book Fear and Trembling, first published in 1843, as an indictment of his native Copenhagen and Denmark.  His words and thoughts still ring true in American society today, where many of us not only want fast and easy food, but fast and easy ideas and beliefs.

In every known epoch and culture the appeal of easy ideas has been powerful.  Why bother to struggle and think when the persuasive words of others can think for us?  In 399 B.C., at his trial on the charges of worshipping false gods and corrupting the youth, Socrates has to open his defense to his fellow citizens and jurors by saying of his accusers that “I was almost carried away in spite of myself, so persuasively did they speak.  And yet, hardly anything of what they said is true.” [2]  It takes a Socrates or a Kierkegaard to sting us into the realization that often our ideas are not our own and that we have bought for cheap vital ideas that can be earned for oneself only through long struggle.

Kierkegaard’s age was one in which commerce — the buying and selling of goods — was coming to dominate the culture.  In his eyes, society mostly consists of sleepwalkers following the vision of the collective society; those who realize this become insomniacs.

Our own age has surpassed Kierkegaard’s in selling ideas for cheap through the use of the image, brought to us through magazines, television, and now the internet.  Thanks to cell phones, images and persuasion can now reach us most anywhere and anytime.

In the images above and below, “philosophy” does not refer to thinking critically or to a coherent worldview, but to a line of skin care.  You can now buy philosophy from a bottle or a jar.  One can move out of despair and toward a good life by purchasing “renewed hope in a jar” for as little as $16!  The jar below tells us “philosophy:  live with optimism, renew with hope.”  Wow, I feel better already! (Let’s see now, the $16 jar buys 0.5 oz., but for $47 I can get 2.0 oz., oh yeah, that is the smarter buy!) 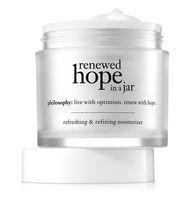 Philosophy.com also offers to help us easily achieve with purchases of the products “purity made simple” and “amazing grace” what some people would consider religious and spiritual blessings.

The point is not that the advertisers and philosophy® Official Site‎ are evil, and it’s certainly not that there is anything wrong with wanting to look good and feel good.    The point is that this selling of philosophy® is just one visible image of what Kierkegaard described – the selling of ideas so cheap that perhaps there may not be any buyers.  The astonishing thing is how difficult it is to even have the thought that there is something a little odd about buying philosophy®, purity, and grace. (Wait!  Am I now violating trademark by even using the word “philosophy®”?  Should I be referencing those who own the word every time I mention it in class?)

Insomnia is not always a bad thing

Kierkegaard argues in Fear and Trembling that no one today can truly understand the gut-wrenching, fierce and raging struggle from which Abraham’s faith was forged in responding to God’s command to sacrifice his son Isaac.  Kierkegaard writes that listeners in those comfortable pews are mentally asleep, and perhaps too the preachers.  And today, as we have learned, one can literally buy “purity made simple” and “amazing grace.”

Kierkegaard would tell us we need to wake up.  “I’m just fine!” we reply.  Kierkegaard, that physician of the soul, writes that “…the specific character of despair is precisely this:  it is unaware of being despair.”[3]  When we buy products such as “renewed hope,” we do not know that in the world of ideas one cannot get genuine renewed hope without doing the work, and the first step of the work is realizing that we may well be in despair, the complete absence of hope.  That despair is masked and soothed by a culture that tells us through images that if we just buy more, just buy the right type of product, earn or inherit the money to get the right house and send our kids to the right schools, all will be well.

Sometimes being disturbed by one’s thoughts is a good thing.  It’s really okay to have insomnia once in a while.  The hope that Kierkegaard offers is that in the world of ideas – unlike the world of market exchange where some inherit their wealth – in the world of ideas “only one who works get bread, and only one who knows anguish finds rest.”[4] Getting through the anguish and insomnia to another resting place is hard work, but it is a truer and better place to rest.

[3] Kierkegaard, The Sickness Unto Death.

I appreciate this so much. We hope to find easy answers to our despair, but there are no easy answers. Thought, reading, studying, contemplation are all difficult in today’s world. How are we to take time to do these things when we have so many distractions?

The radical economic shift in the western world in roughly the past three to four hundred years—generally from a medieval economy to one of capitalism—has led to among other things a move away from the emphasis on the craft of producing goods for sell and trade to the emphasis on the consumption of goods and services. With the latter emphasis, the aspect of marketing such goods and services has become more important than the actual production of the products. Advertising in the U.S., beginning in the 1920s, has grown to be one of the most important facets of what clearly is now a consumer economy.

Previously, goods were made to meet identifiable needs. Today, advertising and the branding of products and services help create the needs felt by the mass consumer market. The emotive side rather than the rational side governs how individuals choose what to acquire. We have today millions who sleepwalk through their lives because they have been conditioned well to minimize the intellect. The sense of belonging to a community, the Commons, has been diminished by the effects of a mass culture celebrating the individual as the star of consumerism. The identification of the individual with the society as a citizen has been replaced by the identification and celebration of the individual as the ‘smart consumer.’

What is the Good Life today? Why it’s feeling the power behind the wheel with your fanny on that luxurious leather seat of that upscale brand automobile. It doesn’t get any better than that.

Yes, I am guilty. It is so easy to go through life without thinking. Just get up each morning and ask what do I need to consume today to be happy? A round of golf, sitting by the pool, eating an expensive dinner – it is easier to do those things than to think, really think. Thanks for waking me up.

Ike, thanks so much for your insight thinking and comment, which makes me ask myself the same questions this morning.

4
0
Would love your thoughts, please comment.x